10/24 update: Exact pet effects and tiered upgrade recommendations have been added to their respective sections.

The latest official tweet from Girls’ Frontline EN has confirmed October 22nd as the New GFL Client’s launch date while teasing the most important mechanic in it: the Forward Basecamp and Exploration system, also commonly known as «Expedition«.

(For readers interested in a bite-sized explanation, both an infographic mini-guide as well as a video summary of this mechanic can be found in the External Links section below.)

The Forward Basecamp, as MICA Team CEO Yuzhong had described it in Shattered Connexion Livestream, is «basically a new way of giving players free stuff».

Sounds too good to be true, doesn’t it? Fortunately, the Exploration system has been better than even the most optimistic player’s wildest dreams in practice — making it the most anticipated feature of the New Client by far.

Why is it so good? In short, Exploration massively closes the gap between casual players and regular grinders by giving everyone access to a steady source of useful in-game items for a fairly low cost. Imagine if Logistics and Auto-Battle had a child with the pros of both, none of the cons, and it was ten times better: that will give a pretty conservative estimate of just how powerful the new Exploration mechanic is. 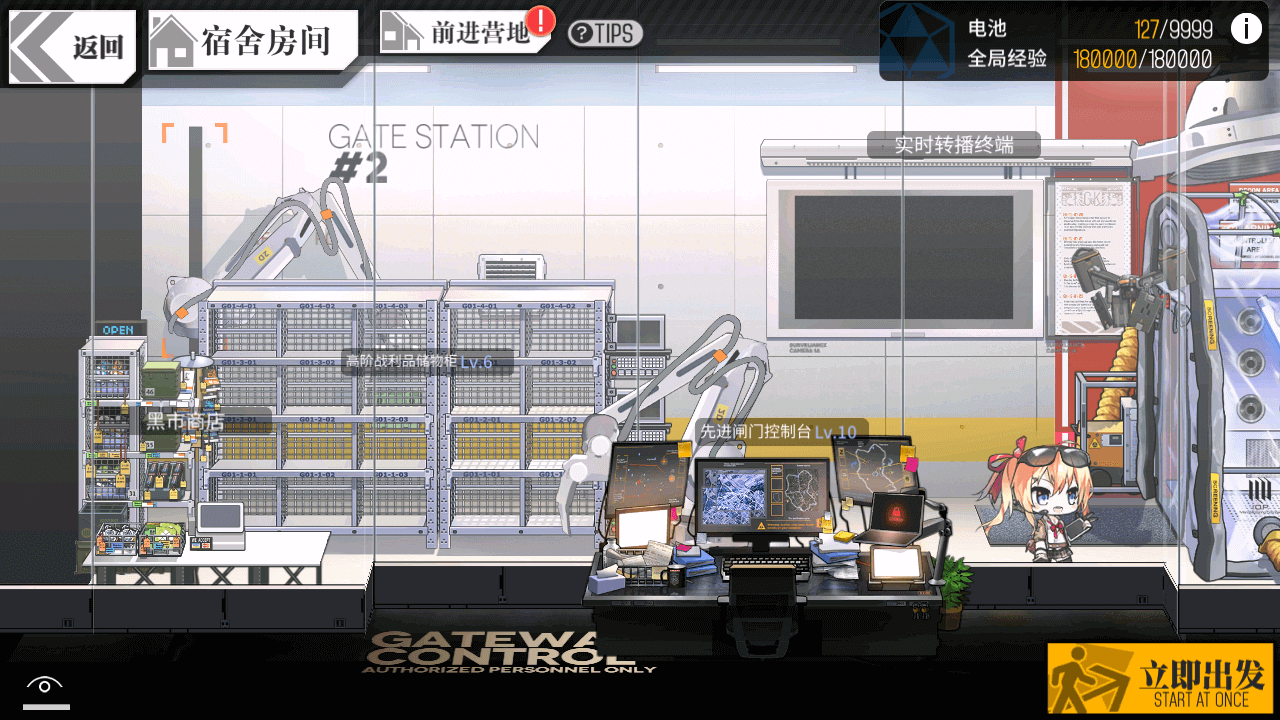 The Forward Basecamp, like any other auxiliary room, contains facilities that need to be upgraded for the room to function optimally.

The Gate Console is the primary upgradeable facility from which the commander can send their units on an exploration mission. Players are recommended to upgrade the Gate Console to Lv. 9 ASAP (the Lv. 10 upgrade is effectively useless), consuming 2,155 batteries total.

Commanders who do not have 3 pets may leave the console at Lv. 8 until they acquire their third pet. 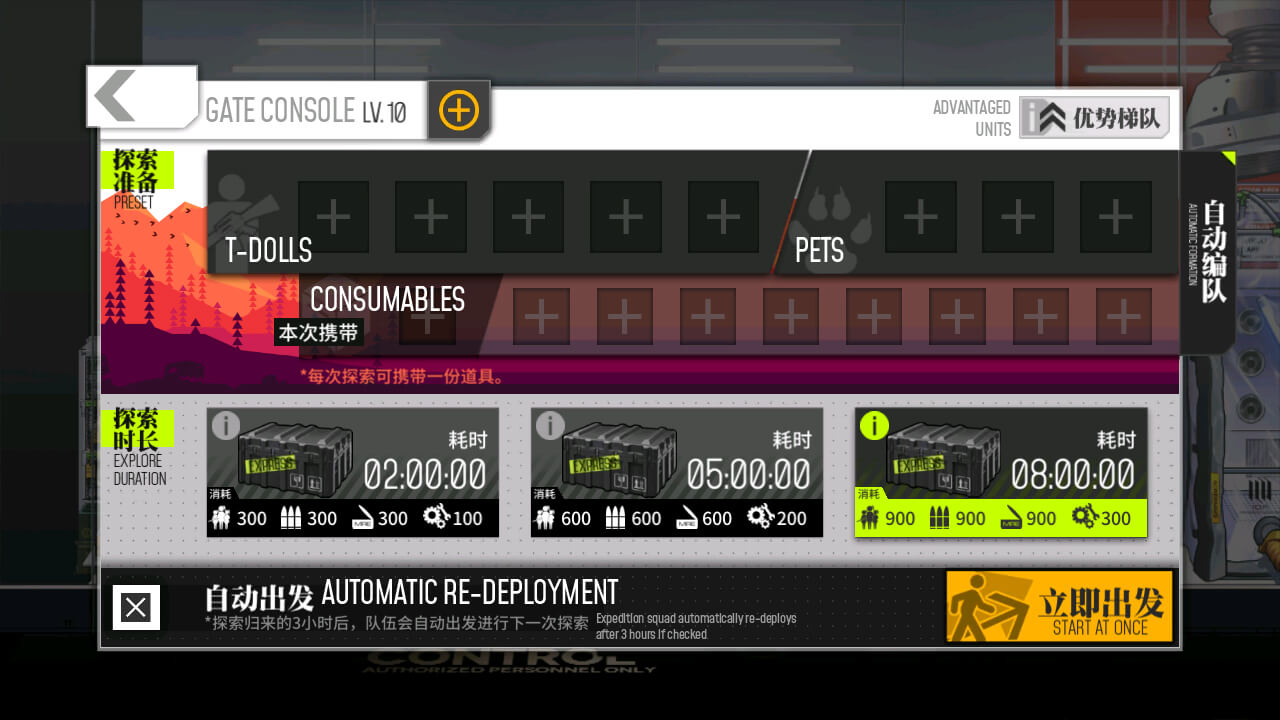 Up to five T-Dolls and three Pets can be selected for deployment from the Gate Console on missions of varying lengths.

«Wait, did you say pets?» you might ask — why yes, pets are finally useful now! More on exactly how they work later, but it is a good idea for players to possess at least 3 dog-type pets (event rewards count) if they have any spare batteries.

Any level T-Doll can be sent on an exploration mission as there is no level requirement. The mission rewards do scale slightly with T-Doll level (0.04% per level, up to 4.8% at level 120), but the bulk of bonus effects will come from deploying advantaged T-Dolls who increase rewards by an additional 8%: 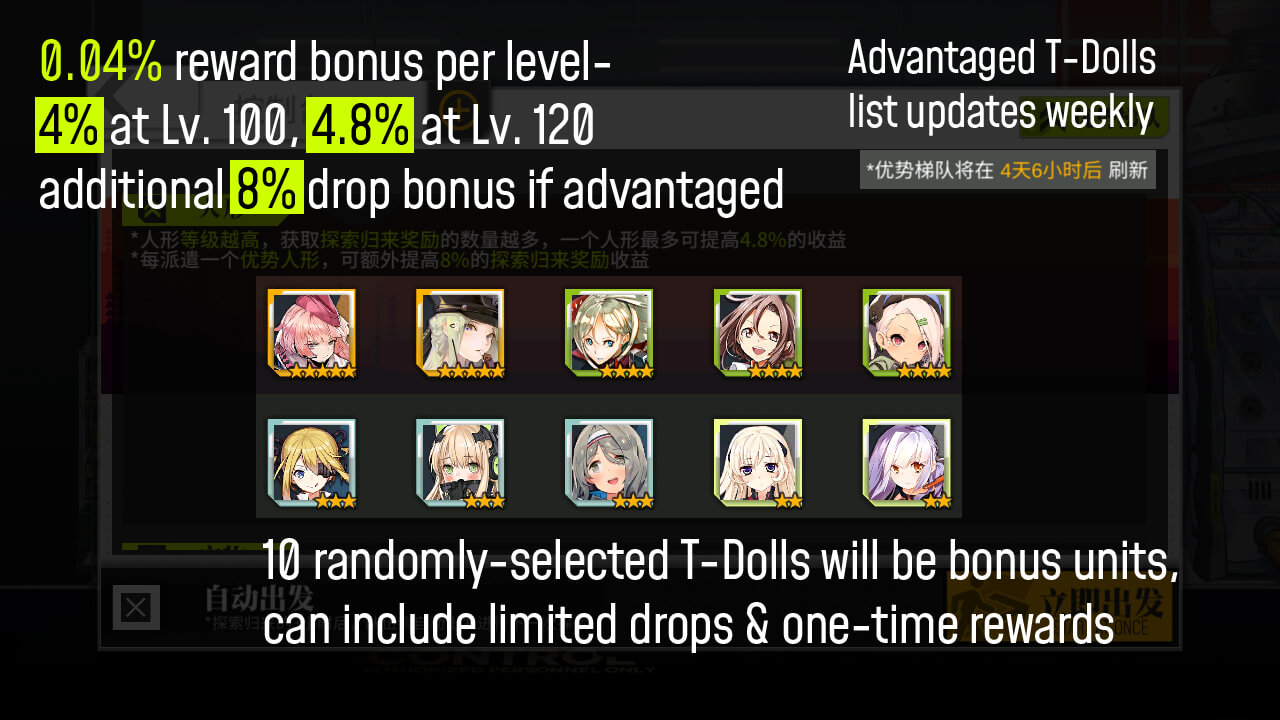 TIP: Commanders are advised to use 15 combat reports to boost an unleveled advantaged T-Doll to Lv. 30, which will grant a further 1.2% boost for essentially no cost.

T-Dolls sent out on an exploration mission do not gain additional experience or affection. They do, however, become unavailable for use in Echelons or elsewhere while out on a mission.

Once the team is set up with T-Dolls, Pets, and optionally consumables, exploration can commence at the click of a button. Players are advised to enable automatic re-deployment so that the team re-sends itself. 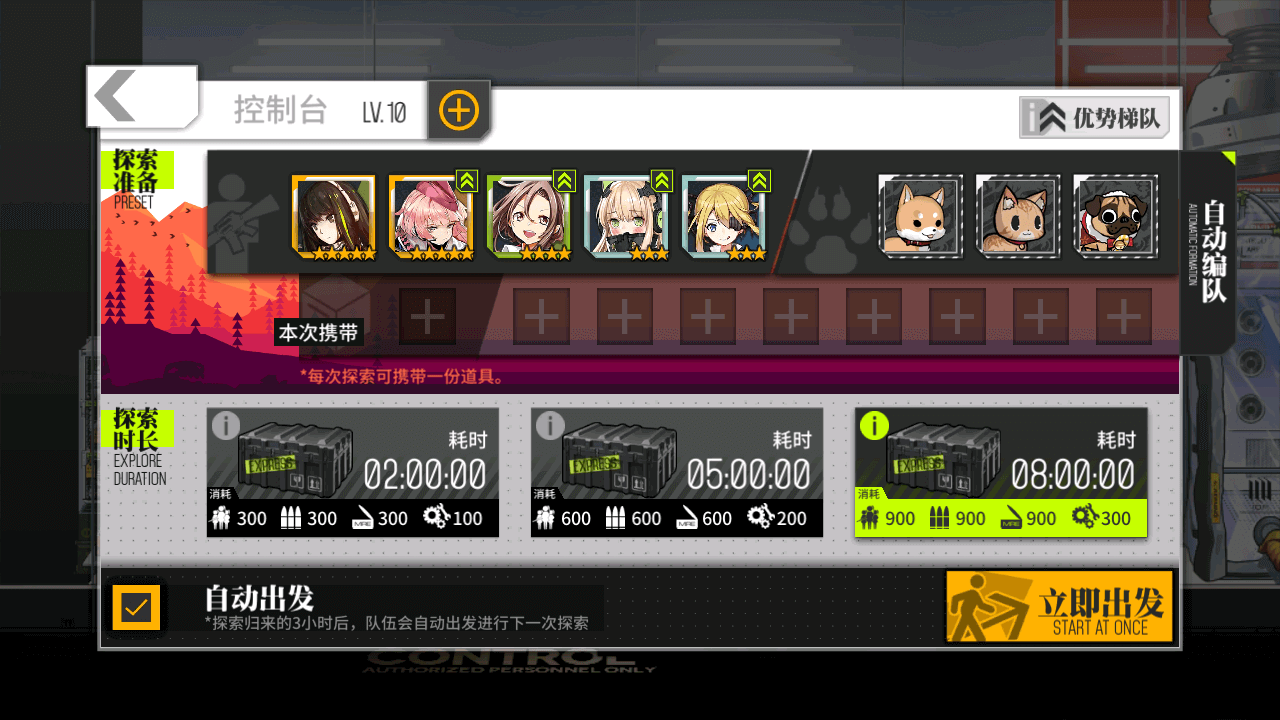 When a team returns from their mission, if automatic re-deployment is checked, they will leave on another mission in 3 hours. Commanders can manually re-deploy before the time is up. Commanders can also cancel an existing Exploration mission, although this does not refund the resources or consumables spent, and will void the current run’s End Rewards.

After the full duration has elapsed, the expedition team returns to G&K base with their collected items. Where does all the loot go? The Loot Rack of course!

Like the Gate Console, the Loot Rack must be upgraded with batteries. Thankfully, this facility caps at Lv. 6 and is pretty cheap to max out, costing only 755 batteries. 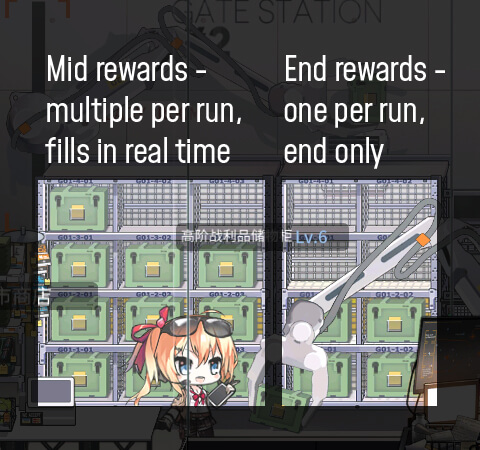 Commanders will need to explicitly collect the rewards by tapping on the loot rack. If the Loot Rack is full on one side and teams are sent out on an expedition, rewards of the corresponding type will possibly be lost; if it fills up completely, the squad can no longer be sent on Exploration missions — even with automatic re-deployment checked.

Commanders who log in every day to collect rewards can leave the Loot Rack at Lv. 3, as it will be large enough to contain a whole day’s rewards. Upgrading it to Lv. 6 can be a decent QoL increase, however, and is still recommended in the long run.

Rewards will be collected all at once; a sample collection from a few 8-hour expeditions can look something like this: 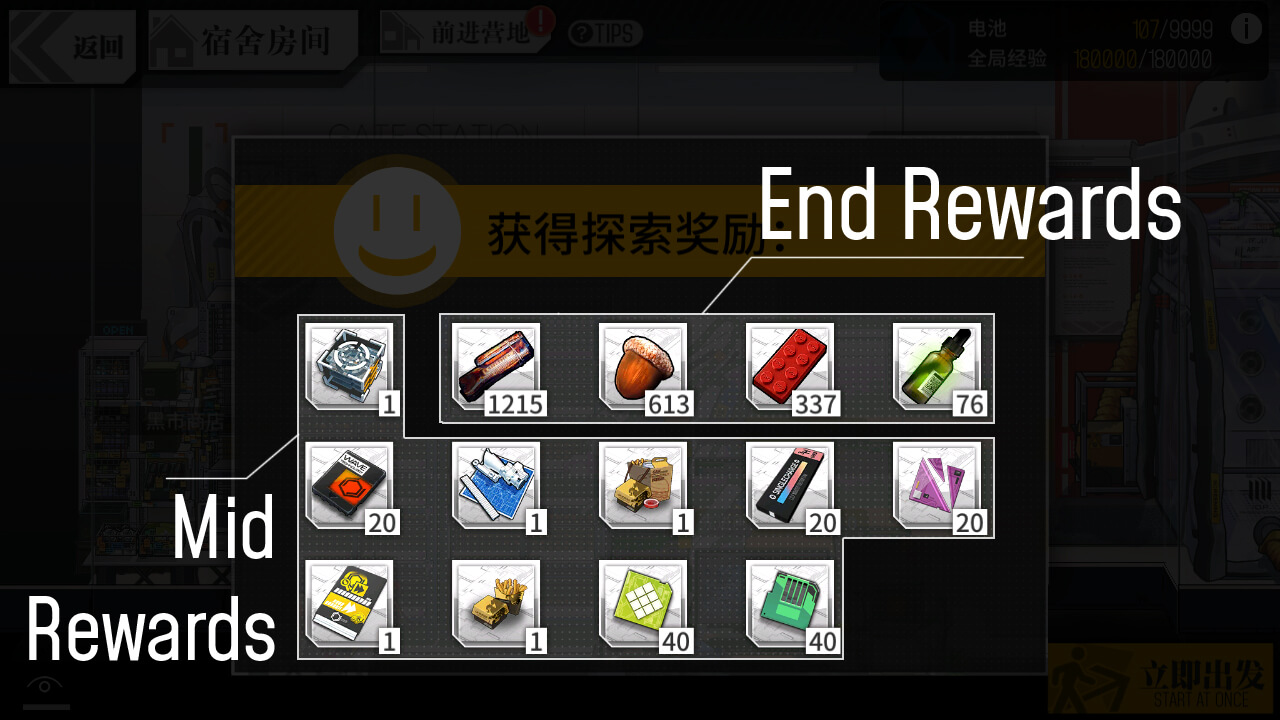 Mid Rewards are obtained randomly throughout an Exploration Mission and can consist of a very wide assortment of items, including but not limited to:

End Rewards, however, are the main attraction here. They are obtained only when the team returns from Exploration, and consist of four new types of currency items: 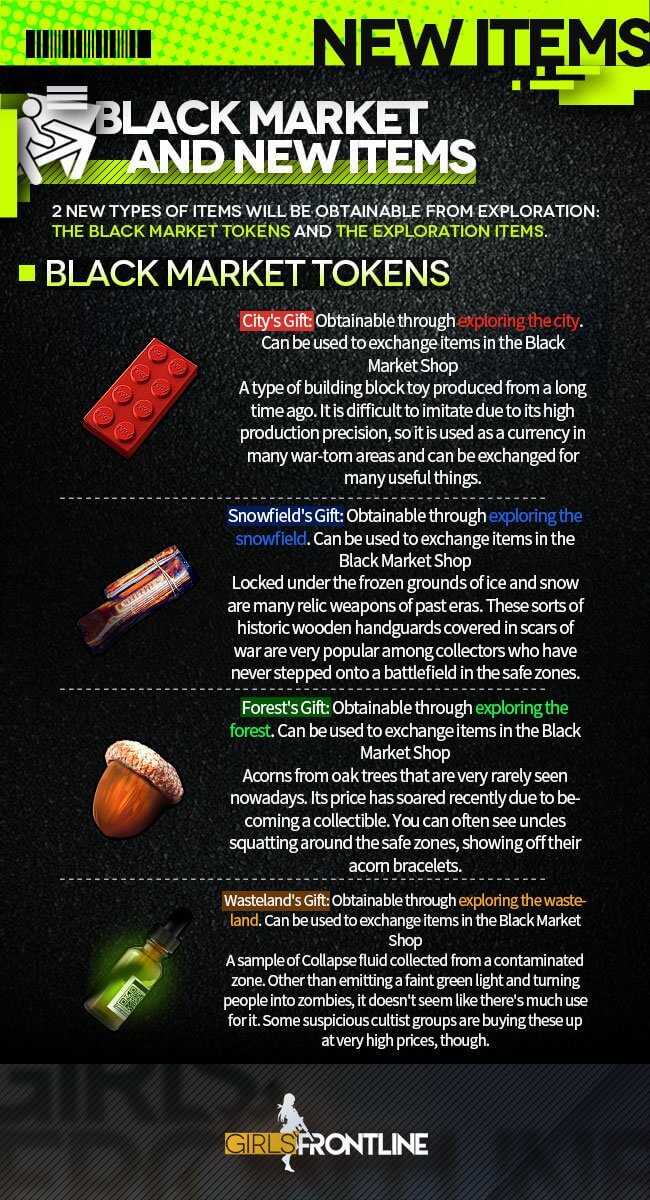 These new currency items can be spent in the Black Market to purchase all kinds of extremely useful items.

The Black Market is found at the bottom left corner of the Forward Basecamp, and is where commanders can go to spend the new currency items. A lot of highly useful common items are offered, as well as many Black Market-exclusive items including Furniture, Special Equipment, and Cosmetic T-Doll Effects. 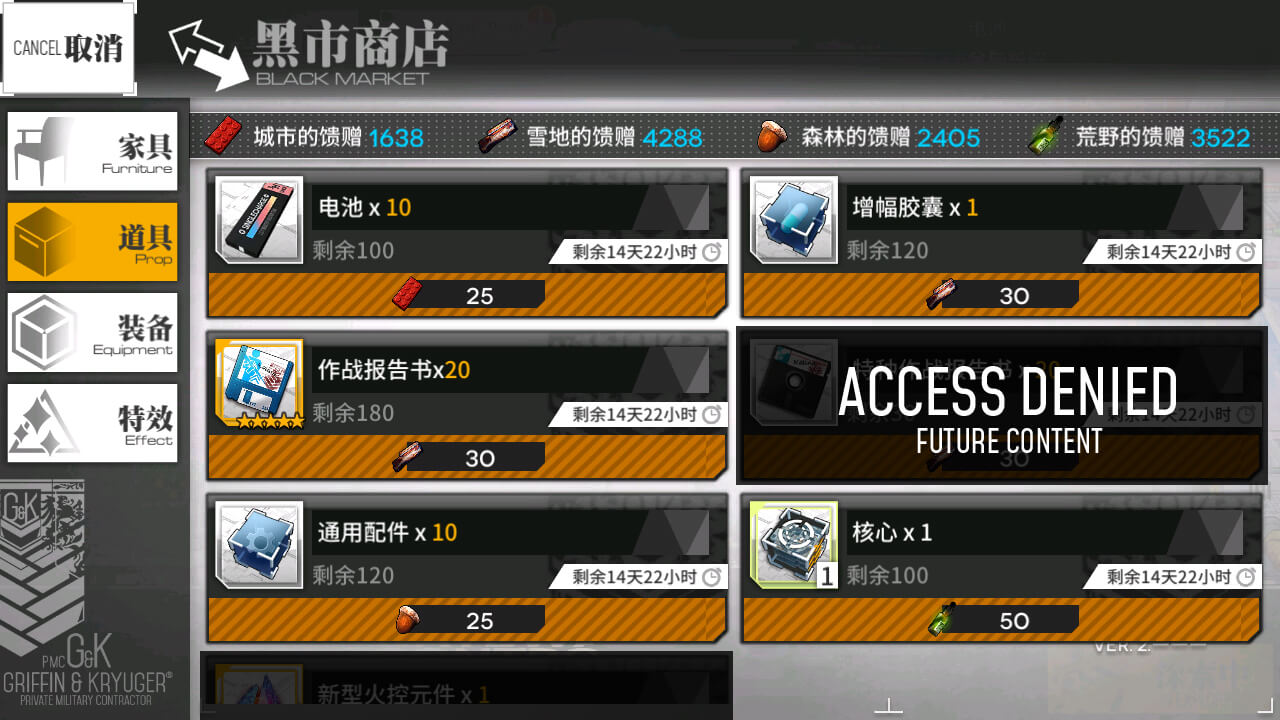 The Prop (items) tab restocks each month with the following items:

The prices are unfortunately not very balanced: capsules and cores are overpriced, and can be skipped if commanders don’t have enough currency to clear out the shop.

Emptying the renewable shop of all the Batteries, Combat Reports, and General Use Parts is highly recommended, as the expenditure-to-reward ratios are very reasonable.

General Use Parts, colloquially known as «Equip Pills«, is a new type of item introduced in Exploration through the Black Market. The substantial Quality-of-Life improvement it brings is so good, in fact, that General Use Parts is widely considered one of the most game-changing items added in this patch.

General Use parts are essentially enhancement capsules, but for equipment only. If you’re not already convinced of their usefulness, GFL YouTuber Ceia has made an excellent video explaining why they are amazing; please check out his guide below:

Exclusive Special Equipment (SPEQs) is also available from the Black Market; the six that EN will likely have on the release of Exploration are shown below: 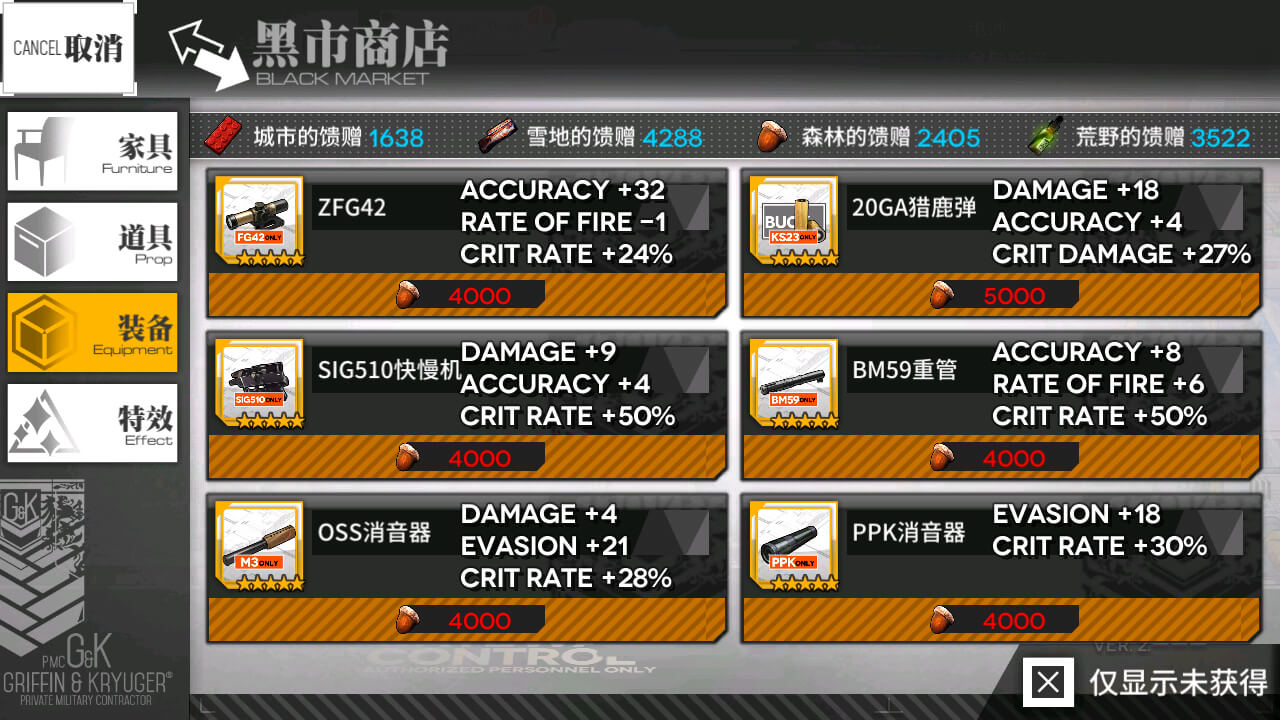 While all types of Special Equipment cost a staggering amount of Acorns, their stats are very impressive and can make these units more competitive with their higher-rarity counterparts.

So far, only two exclusive furniture pieces are available in the Black Market, and they are staggeringly expensive: 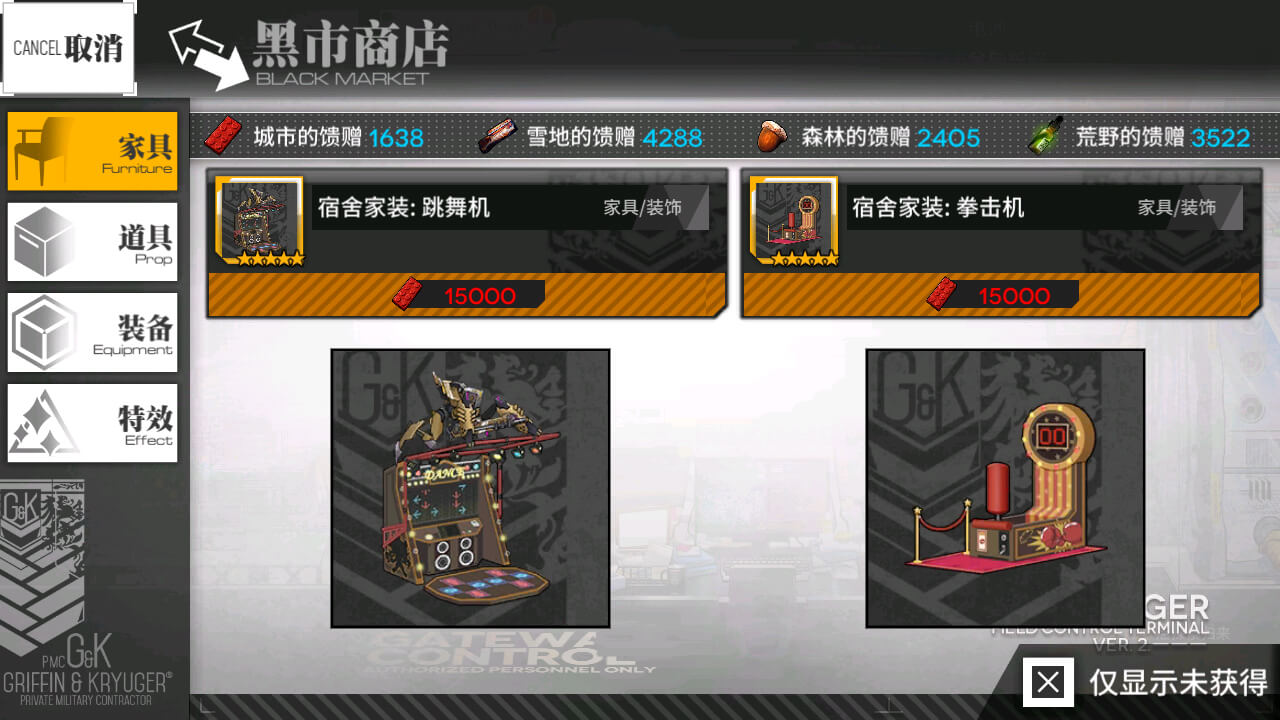 As these are cosmetic only and have no gameplay effect, only commanders wishing to show off their exploration income will be buying these.

These effects are a type of cute cosmetic that can be equipped to T-Doll chibis as sort of an accessory; when they walk around, the SFX will be visible. 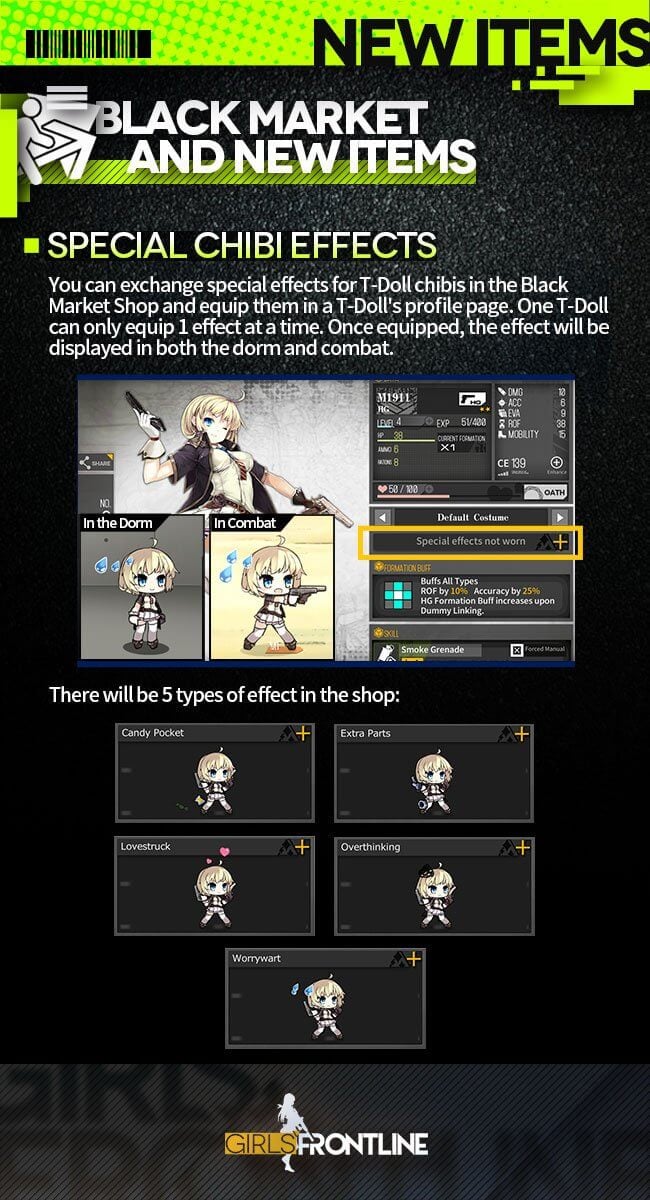 While these effects are purely visual and have no effect on gameplay, enterprising commanders can finally make FNC drop candy as she walks, so these have arguably become the most important thing to buy in the store.

Attentive readers will have noticed that the role of pets and consumables haven’t yet been mentioned in this guide. Exactly what role do they play?

Pets, like T-Dolls, have an advantaged pool that rotates on a weekly basis. Advantaged pets add a small chance to increase End Rewards through visiting «The Mysterious Destination», which boosts the end reward currency amount by approximately 33%.

According to this Chinese NGA thread, each advantaged pet increases the chance of hitting this bonus by 20%.

This is not nearly as important as the type of pet that is being sent, however, as they significantly affect the area being visited and thus the distribution of currency in the End Rewards. 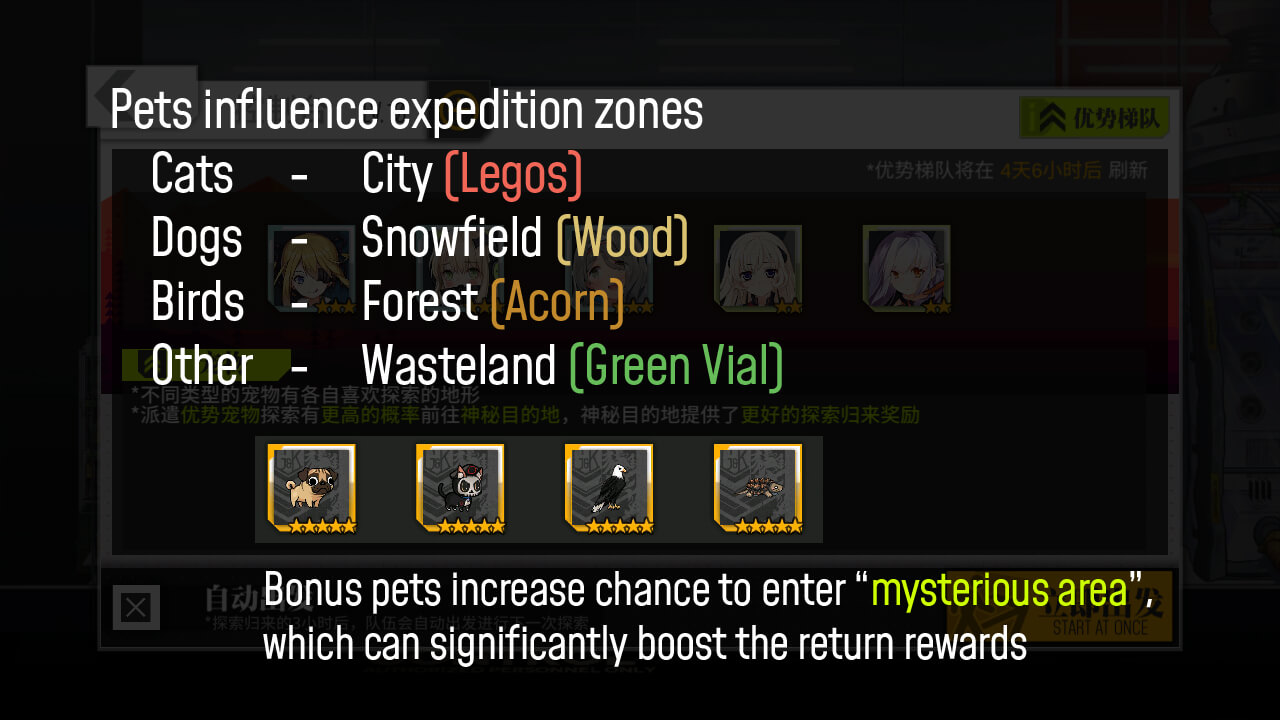 Because commanders may need to focus a specific type of currency for purchasing certain items, knowing this mechanic greatly simplifies the process.

The four locations (City, Snowfield, Forest, Wasteland) each have a starting weight of 10. A pet’s affinity increases the weight of its associated area by 20. For example:

Consumable boost items are obtained from achievements, Exploration Mid Rewards, and sometimes in-game purchasable packages. They have a variety of effects that enhance the Exploration mission itself.