Since around 1993-1994 they have used different distributors for each game. If nothing else is noted below, they have distributed the game themselves.

In spite of their relative success up to fall 1995, they decided to stop publishing games themselves but instead focus on doing development work for other companies.

Legend Entertainment Company has a homepage at http://www.legendent.com/.

There are inofficial sites about Legend Entertainment Company:

They are or have been distributed by MicroProse, Accolade and Mindscape, Inc. 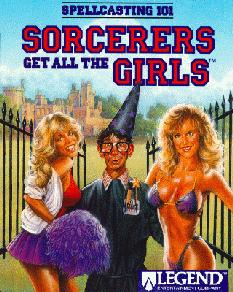 Spellcasting 101: Sorcerers Get All the Girls

Dangerously Close to a Real Education

So you want to be a sorcerer, eh? Want to wave that wand of yours in front of beautiful women and watch ’em swoon, don’t you? Well, you’re definitely going to need magic. And Sorcerer University is the place to get it. Sorcerer U. offers everything an apprentice wizard needs to make it big in the real world.

Social Clubs. Join the famous Tappa Kegga Bru or I Phelta Thi fraternities. Make friendships that last the rest of your life, whether you want them to or not. Attend fun-filled frat parties where the brew is cold, but the women aren’t.

Interesting People. Sorcerer University is famous for its friendly and robust student body (quite a few of them, actually) eager to help freshmen find their way around and get the most out of those late night cramming sessions.

Intellectual Challenge. Learn the art of sorcery from the masters themselves. Refine your skills in the Simulation Lab, where you’ll challenge a ferocious dragon and rescue an imprisoned damsel. Of course, which skills you choose to refine is entirely up to you.

Adventure. You’ve got a mission to accomplish, and it’s not some cheapo, Find-The-Missing-Magic Sword quest, either. We’re talking END OF THE WORLD-type stuff, here — and if you blow it, you can forget that frat party next week.

Sorcerers Get All The Girls can be played in either «naughty» or «nice» mode. With its obvious satirical content, the game is intended for the amusement of adults, or at least those old enough to see an R-rated movie (or sneak into one). It contains language and a general moral attitude that may offend some. It is recommended that these people buy the game, and then throw it away as a form of protest. 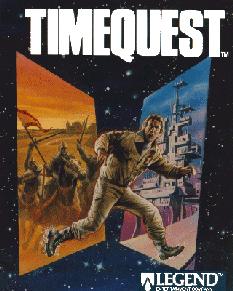 Comments: A rogue agent from the Temporal Corps has stolen a time machine and used it to the alter the past. You must undo what he has done and track him down.

Timequest demands you save the world, ten times over. Time travel used intelligently, puzzles that don’t feel like puzzles, and an actual villain you can loathe (unlike, say, the Thief). It’s open-ended almost to a fault, while still maintaining an urgent pace throughout the game. Although it doesn’t aspire to the literary qualities of Trinity or A Mind Forever Voyaging, the text still succeeds in evoking people, places, and times far different from the norm.

Timequest is a game I am truly saddened to finish every time I play it, compared to the satisfaction at victory, or the relief to be done that I feel upon completing most text adventures. I can’t recommend it highly enough.

The unthinkable has happened — a renegade from the Temporal Corps has traveled back in time and altered critical events in history. Only you can prevent this madman from shattering the timestream and destroying current civilization.

Your mission will take you to four continents and across three thousand years — from Stonehenge, the Circus Maximum and the Hanging Gardens in Babylon; to the Aztec Temple of the Sun, the Great Wall of China and the Great Pyramid on Cheops. You will face mystery, intrigue, danger and death as you untangle the masterful web of deceipt.

The villain’s targets include Julius Caesar, Attila the Hun, Charlemagne, Harun al-Rashid, Genghis Khan, Montezuma, Napoleon Bonaparte and many others. Your orders are to repair the timestream, track this criminal down, and bring him to justice.

TIMEQUEST is a classic adventure game of breathtaking scope and astonishing depth. The player travels to 80 locations, seeing the effects of his actions unfold over 3 millennia. A treat for science-fiction fans and adventure enthusiasts alike, TIMEQUEST includes classic time-travel puzzles and these Legend features: 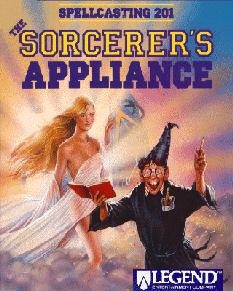 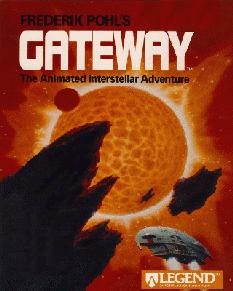 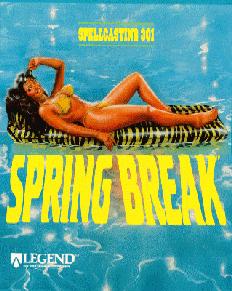 Comments: It’s spring break of Ernie Eaglebeak’s junior year, and this time he’s battling a rival fraternity for control of the beach at Fort Naughtytail. 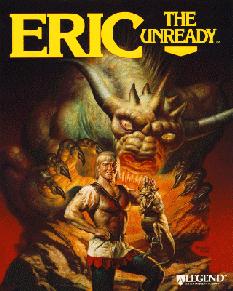 Package blurb: «I laughed till my pants fell down!»
— Larry Laffner

Eric the Unready established his reputation by impaling his instructor during jousting class. Then, when Princess Lorealle the Worthy is kidnapped, Eric begins a madcap quest through this hilarious fantasy world packed with dragons and dwarves, wizards, unicorns and the most fearsome beasts of all, the dreaded Attack Turtles. From the mysterious caverns of the Not So Great Underground Empire to the perilous waters of Swamp Trek, Eric cuts a swath of destruction as he unravels the secret of the wicked Queen Morgana and her lover Sir Pectoral.

Every player will find at least one favorite movie, TV show or adventure game that has been struck by Bob Bates’s pen! From the award-winning author of TIMEQUEST. 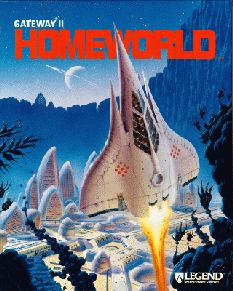 Package blurb: Five hundred thousand years ago, a technologically advanced race called the Heechee ruled the galaxy. Then they vanished.

San Francisco 2112 A.D. A fanatic cult of terrorists plans to bring the Heechee’s ancient enemy to Earth and purify humanity in a bath of cleansing fire. You must stop them, but you can’t do it alone.

The race to stop these madmen catapults you on a journey to new worlds and new adventures and ultimately across the event horizon of a black hole where you discover mankind’s last remaining hope for survival — the Heechee Homeworld.

Based on Frederik Pohl’s Hugo and Nebula award-winning Heechee Saga. 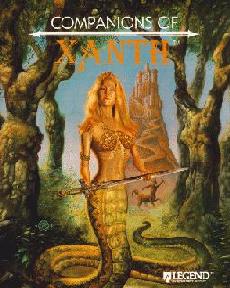 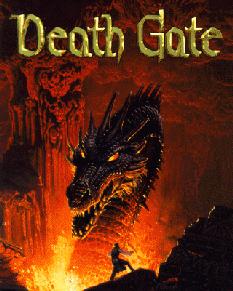 Package blurb: Long ago after centuries of war, the Sartan race smashed the World Seal and sundered the Earth into separate magical realms, each sealed from the other by the powerful Death Gate. In isolation, magic was corrupted, knowledge lost and the common humanity that once bound the world was forgotten. The defeated Patryns, trapped in the nightmarish prison realm of the Labyrinth, became twisted with hatred and plotted their revenge. Born in this savage and unforgiving land, you escape and undertake a new quest to find the pieces of the World Seal, wreak revenge upon the Sartan and deliver your people from the daily torment of their living hell. 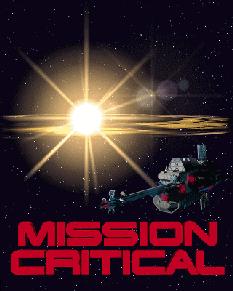 Comments: You awake aboard your spaceship to discover you are the only crew member still aboard. You must discover what happened to the crew, and learn more about the secret they were protecting. 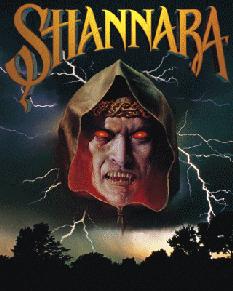 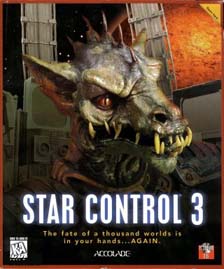 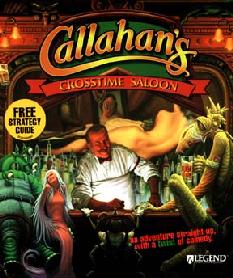 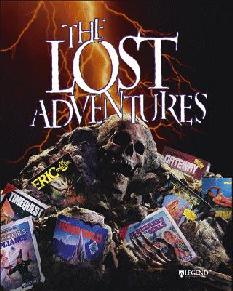 If you find any errors or have information that is missing, please let me know

The best quality on multiplayer TPS is no longer a console exclusive. This was the challenge that Digital Legends took on and adopted as their philosophy. Throughout the years, the studio has been keeping quality and innovation as their main pillars. As a result, they are now an international reference in mobile TPS action games and one of the most sought-after studios to test state-of-the-art technology.

Digital Legends Entertainment has worked many years for big Industry players such as Electronic Arts, Disney and Adidas either developing flagship titles or their key IPвЂ™s. One of the many things that makes this studio unique is their proprietary game engine, Karisma, which is one of the most powerful in the market. Karisma, makes outstanding graphics possible on mobile devices which players thought were only possible on consoles, creating an immersive and unparalleled experience for action game lovers. These high-quality standards gained the attention from many technology partners such as Sony, Samsung, Google and Apple, which invited them to announce Kroll, Digital LegendsвЂ™ 3D fantasy adventure hackвЂ™nвЂ™slash game, in the same Apple Keynote in which the App Store was presented.

The pivotal moment for the company arrived when they chose to focus on their own IPs and became a studio specialized in high quality multiplayer TPS games developed from the ground up for mobile devices. The Respawnablesв„ў marked the beginning of this new era for the company. With over 56 million downloads, this third-person cartoon-style action game is now a consolidated IP. The Respawnablesв„ў triggers the imagination and fandom of the lively community, who love creating fan theories and rich background stories about the game universe. Afterpulseв„ў has been launched for iOS and Android, a hardcore tactical TPS with cutting-edge, realistic graphics and an innovative monetization system, which is particularly successful in the Asian market. Afterpulseв„ў has won multiple awards and it has been featured in the App Store EditorвЂ™s Choice in most countries becoming a great example of how realistic TPS are not exclusive to consoles and computers. Other important elements to their gamesвЂ™ successes are the community engagement and fluent conversation that allows the studio to understand playersвЂ™ motivations and challenge them with weekly content releases.

Developing mobile TPS action games is extremely challenging as you must surpass critical areas such as graphics, real-time multiplayer-pvp, free to play monetization, and smooth touch control systems on the top of having fun gameplay. Digital Legends Entertainment has thrived in this demanding adventure thanks to a strong, international and multidisciplinary team with many years of experience in different areas of the videogame industry. This fusion of industry veterans, emerging talents and passion for their work is the key to their success.

DLE’s games are powered by their own game Engine, known as Karisma, proprietary technology that solves the problem of enabling the content across different smartphone platforms and at the same time, empowers the unique features of the device itself. DLE is recognized as a reference developer for iOS, Android, Linux, and other native OS.

At Digital Legends we consider that technology is a key factor to be able to stay upfront in the hugely competitive games market. The use of in-house cutting-edge technology ensures that the highest level of quality is achieved in all our products.

The company is actively participating in R&D lines to guarantee it is always at the forefront of the technological advances.

Our games are powered by in-house cutting-edge engines and tool chain, giving us the possibility to take full advantage of the performance of the target platforms for each content, as well as diminishing production risks during the development process from the concept to the final product delivery to our customers and consumers.

The results of our technological achievements have already been recognized and acclaimed within the games industry, by means of several global industry awards.

Xavier Carrillo-Costa has over 15 years experience in the viodegames industry where he has served as CEO, Executive Producer and Development Director.

Xavier has been leading Digital Legends to position the company as a leading developer for high quality AAA titles and big franchises for smartphones and connected TVвЂ™s and as a reference in the creation of Free 2 Play games for midcore audience such as The Respawnables.

Xavier has studied Telecommunications Engineering at the Polytechnic University of Madrid.

He is fluent in Spanish, French and English and has some knowledge in German and Mandarin.

Jean-Philippe Raynaud has been serving as MD and CFO for Asia and Middle-East for industrials international company for the last 10 years . He was previously an International Financial Controller in a services and utilities company and provides experience from the Financial and Strategy areas.

He has experience in start-ups and re-structuring small and medium sized companies and his working language skills include English, French and Italian.

Before his technology expertise while pioneering on mobile since the start, he had a consolidated experience on PC, PS, PS2, Xbox, Xbox 360 and PS3 in the positions of Lead Technology Programmer, Technology Architect and Technology Programmer at Pyro Studios (Eidos owned) for the multi-million seller Commandos saga (EIDOS): Commandos 1 Beyond Enemy Lines, Commandos 2 Men Of Courage, Commandos 3 Destination Berlin, Commandos Strike Forces and Imperial Glory (EIDOS).

Unai is fluent in Spanish and English and also a lecturer on Graphics Programming at Universidad Complutense of Madrid.